Testing is essential for developers working with microservices, but the architecture creates challenges. There's more to manage and more interactions that can go wrong.

Your network of services, and the resources they use, are hard to recreate for effective testing, and it's important to keep this in mind when developing a testing strategy.

In this article, you'll learn how a microservices testing strategy differs from testing a monolithic application. You'll learn about the issues involved and what you can do to overcome them. This means that moving forward, you'll be able to make the right choices and build an optimal system.

Why You Need a Microservices Testing Strategy

Many developers have faced the challenges of testing microservices, and drawing on their experience will help you choose from the possible approaches. Picking the right testing approach will ensure you optimize your resources and get the most out of your testing. You'll detect most issues early and be better equipped to solve them.

There are several types of testing commonly used by software development teams, and your testing strategy will involve some combination of these. To pick the right ones for your use case, you need to know their pros and cons. Let's run through the different options and see how they apply to microservice architecture specifically:

There are four main tests you'll learn about here: 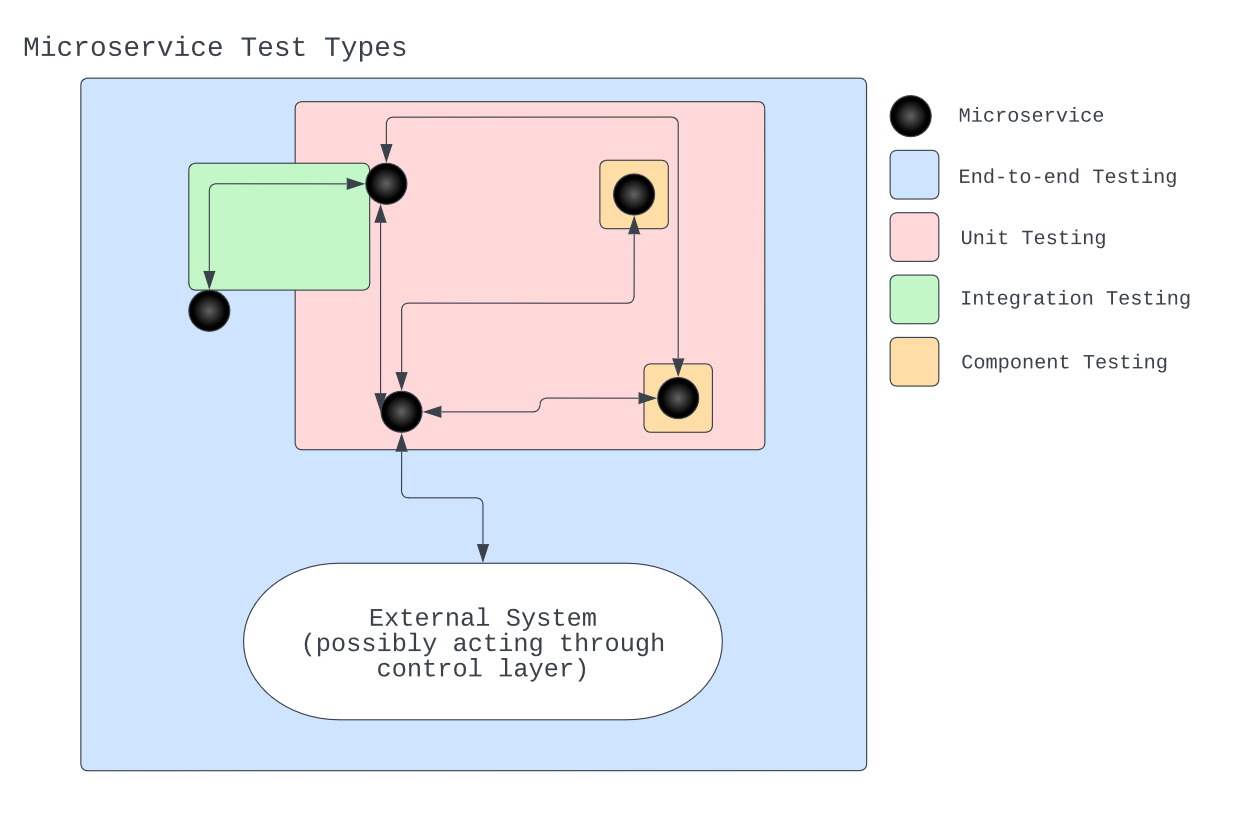 Unit testing tests a small chunk of code based on a single area of functionality. In microservices, these tests may involve units of code within a single service, or several services interacting together to perform a common function.

Integration testing is used to test communication between services. That's particularly important with microservices, where many small services have to interact with each other.

Component testing tests an individual microservice, usually mocking any external calls or interactions. This is a simple way to unambiguously identify problems with individual services.

All three of the previously mentioned tests are a mid-point between component testing and end-to-end testing and can help programmers make sure features work as expected.

End-to-end testing is a high-level approach where you treat the whole system as a black box and ensure it delivers the outputs you expect. There's nothing wrong with using this, but some developers recommend choosing other more granular test types when working with microservices.

That's partly because the added complexity of microservices-based systems makes it more expensive unless you have dedicated tooling. These tests also tend to be handled by Quality Assurance (QA) teams rather than developers. However, they do provide high quality feedback, as they reflect how an end user interacts with the product.

Since microservice-based systems are built around multiple small units, your strategy should reflect that. This means component testing should be used to test each unit, and integration tests should be able to handle interactions.

Due to the complexity of the environment, end-to-end testing is typically used less than the other setups, with unit testing doing a good job of testing specific features or functionality that involves multiple services.

Let's look at some of the specific challenges you'll encounter with microservices:

Microservices can potentially interact with many other microservices, and as your system grows, the number of possibilities increases exponentially. It's essential that your test strategy covers all these possibilities and allows for unforeseen interactions. That way, you can guarantee your system is robust, secure, and functional.

The multitude of services also means there are multiple points of failure. In addition to the possibility of bugs, there's also an increased possibility and variety of infrastructural issues to think about. Services and resources can be delivered using various other distributed platforms and external components. That can cause issues with observability, making it hard to gather the data you need to spot issues and trace them to their source.

There's also the problem that individual developers might be less familiar with what's there than on a smaller system.

If different teams and testers work with different microservices, then you face a challenge coordinating them and getting access to the right expertise when you need it. You may also face disagreement over the best approach. Good management is essential if you're going to build a system that works for everyone.

Dependency management is another headache that only grows as your number of microservices increases. As multiple teams work on different services, you'll have to make sure all the required updates and workflows are factored into your testing system.

You need to have the latest versions of dependencies to ensure testing reflects the current state of your microservices. If not, you risk failing to spot issues that occur in the latest version of your deployed software. You can also turn up false positives if the latest updates resolve problems that show up on your now outdated test setup.

How to Implement a Microservices Testing Strategy

Integration testing is particularly important with microservices and requires more focus. There are many services interacting, so ensuring they can do so successfully is just as important as making sure the services work correctly.

With regular integration testing, you rely heavily on mocking dependencies. That's a problem with microservices, as there are many more of these dependencies, and they often change.

That leaves you with a high maintenance burden, as you have to do all those extra updates to keep your testing current.

You'll also need to pick testing tools that fit the project. As mentioned, a microservices system can get complex, potentially with many languages, data stores, and other technologies interacting with each other. That can mean different testing technologies chosen to fit your setup.

It all sounds very daunting. Fortunately, there are tools that can help you, including Signadot. Signadot is a Kubernetes-native platform that lets you easily create multiple sandbox environments, and there are several ways it can help you test microservices.

With Signadot, you run tests against a real environment. That gives you high-quality testing signals and eliminates the need to write and maintain mocks. This approach works very well for integration, feature, end-to-end, and performance tests, and it means that you don't need to avoid end-to-end testing, which is otherwise challenging with microservices.

Tools can also help you spot and debug problems earlier. The later you find bugs, the more it costs. Shift-left testing means focusing your tests earlier in the development life cycle to pick up issues more quickly and fix them more cheaply.

With microservices developed independently, and perhaps using different languages and technologies, you need to make shift-left testing a specific target to ensure everyone on the team knows they need to implement it.

Signadot lets you test quickly thanks to its sandbox environments, which eliminate many of the structural considerations that come with setting up tests. This gives you the fast feedback loops of shift-left without as much work, and you can do most of your testing before merging code.

Getting high-quality feedback quickly while actively changing code is invaluable, as the feedback can quickly be used to make changes, which can then be tested. It's a virtuous circle.

Signadot also lets you scale your testing across large engineering teams. Developers working on microservice applications don't have the luxury of being able to test their work locally. When working on architecturally complex cloud applications, each feature being worked on needs a working copy of the environment for proper testing.

As your development team grows, the costs of duplicating all these environments increase, but so does the need for developers to be able to work without stepping on each other's toes. Signadots’ sandboxes give programmers the independence they need, even at the pre-merge stage. They can collaborate asynchronously, using the sandbox to isolate the services they are working on while connecting them to a shared copy of the wider environment.

There are other solutions to dealing with this problem like providing an environment per namespace in Kubernetes. However, this approach doesn’t scale well when complexity of the application increases.

Until recently, organizations had to choose between these unattractive options. However, now, there are better ways to test. Signadot's sandboxes reduce your infrastructure costs by removing the cost of spinning up different environments. You don't need to provision multiple copies of your architecture or accept bottlenecks.

Signadot makes use of the fact that a change typically only involves a few services and provides a baseline environment containing a shared pool of services that can be used to provide what hasn't changed to each sandbox environment.

Spinning up ephemeral, stateful resources is another big headache with cloud-based environments. With Signadot, ephemeral resources, such as databases, are provided via plug-ins, which are set up and removed along with their associated sandboxes. That's fast, simple, and relatively inexpensive.

These added features are a game changer for microservices testing. They all combine to give you on-demand virtual environments that scale well and cheaply. That makes it cost-effective for developers to work independently with fully functional environments that replicate the live systems. Your tests are more accurate and won't break the bank.

Developers need to raise their game when testing with microservices, and getting your testing strategy right is a big part of this process. That means using regular best practices as well as working to manage the additional complexity that microservices create.

With the right software and testing framework, things are easier. Microservices testing requires an increasing amount of effort as you scale up, so using a dedicated tool like Signadot can help you keep up.

Signadot is a Kubernetes-based platform that lets you create ephemeral sandbox test environments. With it, you can speed up your testing with fewer resources, enabling fast feedback loops that help deliver better software.